In which SexyCyborg, a badass female hacker, designs 3D printed shoes that can break into computers and more.

From handguns to entire office buildings, 3D printing allows anyone, anywhere to design and build powerful engineering feats. Coders especially have utilized 3D printing in ways I’m a fan of, and one of these artists is Chinese hacker SexyCyborg, who created a pair of gravity defying shoes to give her a leg up in the pen testing field.

Penetration testing is like the chaotic good of hacking, wherein a hacker doesn’t just sell her independently researched exploit to the highest bidder from anywhere in the world. Many large organizations with vast data and IoT to protect will offer “bounties” for lone good guy hackers and private cyber security firms alike to compete for: if you can break into their systems, with proof, and show them how to nix the holes, they’ll thank you handsomely. The Pentagon once brought in a team of 1,400 individuals to find security vulnerabilities on their systems, and some were rewarded up to $15,000 each.

SexyCyborg is one of the many young people taking advantage of the opportunities in this industry. Working as an independent pen tester, she decided to get inventive with her method of sneaking tools onto a site. The more seemingly innocuous, the better. This led her to 3D print what she has dubbed her “Wu Ying” heels. “Wu Ying,” which means “shadowless,” is a name she derived from Chinese folk hero/martial artist Wong Fei Hung and his infamous “shadowless kick.”

On her Imgur, SexyCyborg details the build of the shoes and shares her blueprints so that other Printers can try them on for size. The block wedges holding her up would appear to be solid, but they’re hollowed out inside to fit a very specific set of tools. Each shoe’s removable portion works like a drawer. The coolest part? Even with all of that gear loaded, they’re lightweight enough for her to walk with ease. She says that she can stand on them without the heels in. 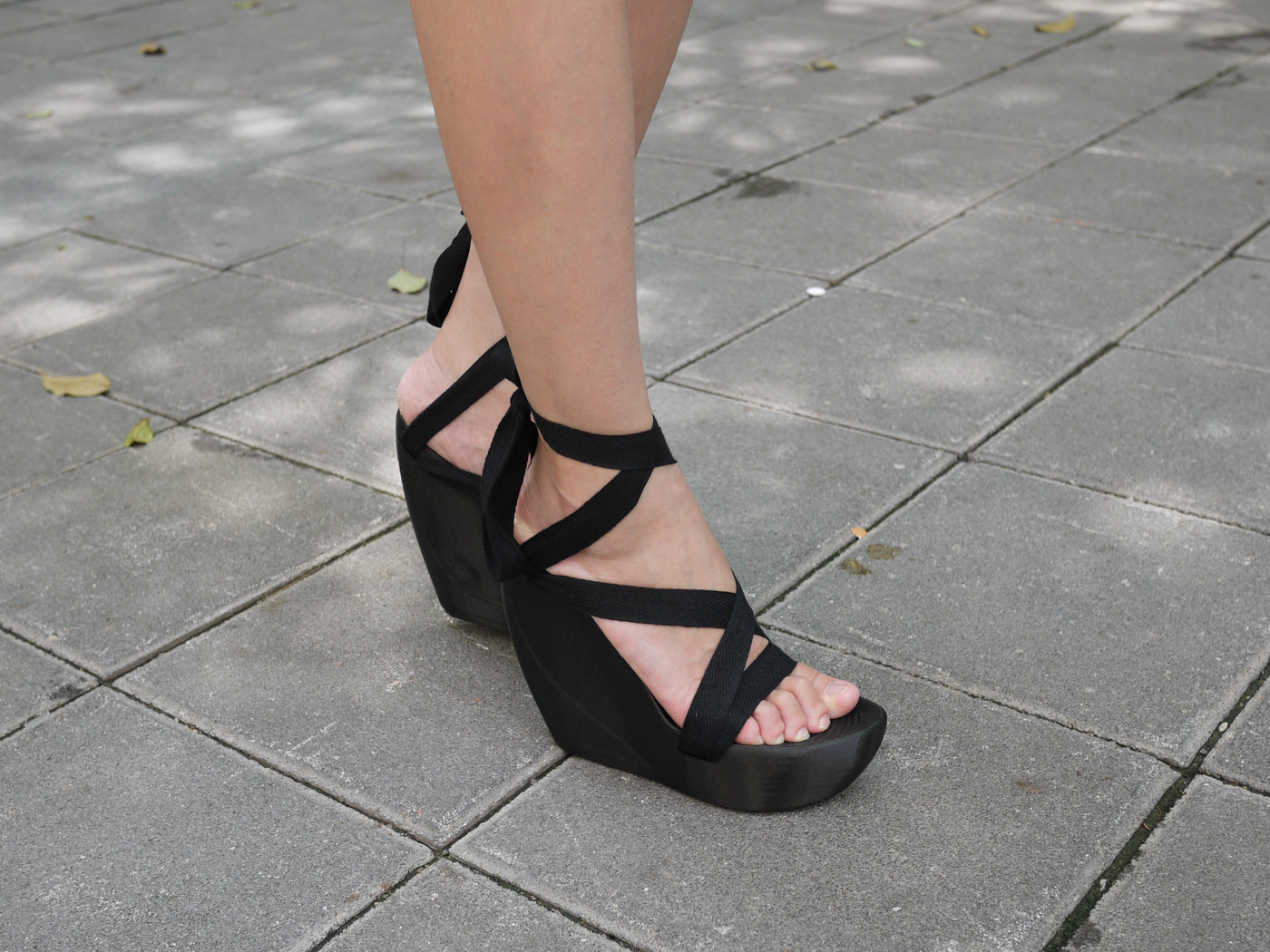 What she’s got inside:  an OpenWRT TL-MR10U wireless router, a USB keystroke recorder, a set of lock picks, and a retractable Ethernet cable. That small, harmless-looking router runs a software called Wispi, with which, as SexyCyborg states, “you can fake being a friendly/known WiFi access point and setup a fake login page to capture passwords.”

In a Q&A with vice.com, she explains why she specifically chose women’s shoes for her project. “Since most women’s clothing do not have pockets, if we lose our handbags or they get stolen, it’s really a huge problem. Shoes have a lot of unused space that’s not taken advantage of.”

Imagine your stashing phone, credit cards, and keys in the safety of your wedges the next time you’re out at a bar but don’t want to carry a purse but also don’t want someone reaching in for the valuables on your person when you slip them into the waistband of your pocket-less jeans for a second to hold your beer. (This happened to me. @ Mickey’s in WeHo, I love you, but your clientele is shady as fuck.) SexyCyborg also suggests using these shoes to store devices like LibraryBox, on which you can take ebooks, movies, music and more on-the-go.

On what it’s like to be a woman in her sometimes male dominated field, and on some of the backlash she received when her female-centric product went viral, she has some friendly words. The disclaimer at the end of her “Wu Ying” Imgur thread makes reference to one of the first times the Internet found her in a big way: Reddit, in true Reddit fashion, made some of the highest voted comments on her heel thread about her rack and whether or not they were fake, complete with edgy lines about “penetration” and what she was really distracting with. She doesn’t care.

“A lot of the doubt associated with my projects is a bit like people thinking about trees being cut down by burly men with axes,” she told Vice, “while dismissing the idea of a women cutting down trees because they are unaware that chainsaws have been invented.” Chainsaw away, sis.

“I have more ideas for 3D printable projects for young women that I’d like to do. It’s a good learning platform and I’d like to come up with a reason for girls to take an interest in it.”

True to her word, SexyCyborg has released her source files for free so that anyone can print shoes just as badass.

L. Malia is a twenty nine year old fiction writer in California. Her works have been featured in Legendary Women Inc., The Prism Review #16, The Write Place at the Write Time, and 101words.org.